Two touching photographs of a mom, currently battling breast cancer, breastfeeding her newborn son for the first time are gaining attention on the Internet and across social media sites.

The Mirror reports the pictures were originally posted to the Facebook page of Florida-based photographer Kate Murray.

They show the mom, who is said to have undergone a single mastectomy and chemotherapy while pregnant, feeding her son from her remaining breast.

Little is known about the mom who was not named in Murray’s post accompanying the pictures.

Murray wrote that the woman was “diagnosed with stage 3 breast cancer halfway through pregnancy.”

“She had one breast removed and underwent chemo while carrying her miracle baby,” Murray added. “She was induced at 36 weeks in order to receive more treatment.” The boy, who also was not named in the post, was born “ready to prove to the world his strength he inherited from his strong mommy,” the post continues. “He latched on to her remaining breast all on his own and the room erupted in so many emotions.” Murray said in her post that the photos captured the “definition of strength, love, and pure raw beauty.” “I am beyond blessed to have met and gotten to know this woman and her family, and so honored she asked me to be there to document these precious moments,” she wrote. Murray urged others to share the photos and continue to pray for the family. Since the two images were posted to Facebook they have been “liked” over 290,000 times, shared over 68,000 times and have received numerous comments from users, with many other women telling their stories of battling cancer while pregnant. 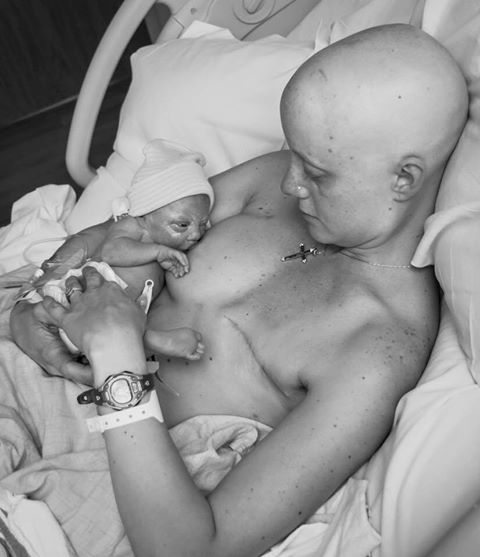 Others simply offered words of praise and thanked all involved for sharing the moment. “This picture embodies the story of life in so many ways. It's beautiful, it's emotional, courageous, it's heartbreaking and full of Grace,” wrote Facebook user Amber Feaster in a comment characteristic of so many others. “Thank you for sharing this.” ABC News reported in 2012 that instances of women being diagnosed with cancer while pregnant appeared to be on the rise. Some medical professionals speculated that the rise had to do with women delaying pregnancy until later in life. Studies cited in that story were reported to indicate that women who underwent chemotherapy after the first trimester may not be putting their babies at risk as had been previously thought.

This story has become an inspiration for many women who have experienced similar things . Here are some reactions :

World’s Most Extreme Bodybuilders   From the man with the world’s biggest biceps, to the bodybuilder behind the Incredible Hulk, meet some of the most extreme bodybuilders out there (By:  … Read more