Events that are so rare and beautiful that they may seem unbelievable at first but they do happen..for real (By: Oddee) 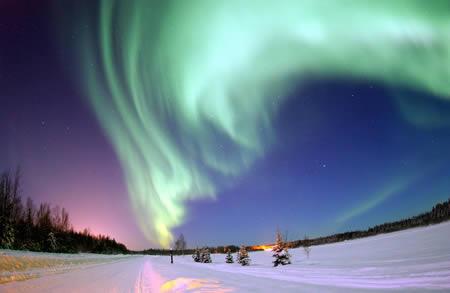 Undoubtedly one of the most beautiful events to occur in our world, the Aurora Borealis, also known as the Northern Lights, has both astounded and amazed people since it was first discovered. This phenomenon ocurrs when the sun gives off high-energy charged particles (also called ions) that travel out into space at speeds of 300 to 1200 kilometres per second. A cloud of such particles is called a plasma. The stream of plasma coming from the sun is known as the solar wind. As the solar wind interacts with the edge of the earth’s magnetic field, some of the particles are trapped by it and they follow the lines of magnetic force down into the ionosphere, the section of the earth’s atmosphere that extends from about 60 to 600 kilometers above the earth’s surface. When the particles collide with the gases in the ionosphere they start to glow, producing the spectacle that we know as the auroras, northern and southern.
Prev 1 of 10 Next
Advertisement
« 20 Photos Show That Eyes Are Windows To The Soul
14 Most Beautiful Sea Slugs »

Photographer Ivette Ivens is on a mission to show just how ‘pure, beautiful, saintly and celestial’ breastfeeding is, and we think she’s succeeded.   Breastfeeding has become a controversial topic  … Read more

Extremely Beautiful Minerals And Stones   ”Mineral” is not the first thing to come to mind when you hear the word “beauty,” and that‘s a pity because they look so,  … Read more

After My Son Died Of Cancer, We Spent 10 Years On The Road Rescuing Each Other   Eleven years ago a bad card was dealt. My only child, son Lance,  … Read more